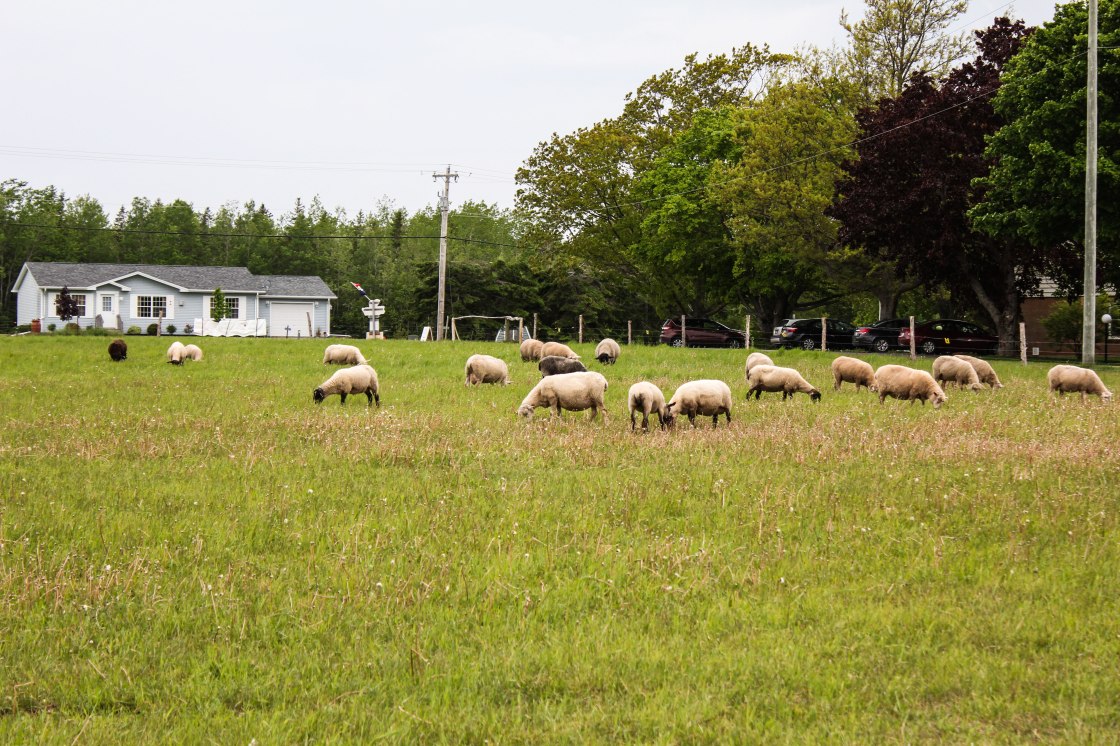 So as you may or may not know, we just got back from a trip to the little island province of Prince Edward Island (aka, PEI). It was our first time there, and I was especially excited about the PEI Fibre Trail, which is pretty much a map of textile-related producers and artisans around the island. There are quite a few stops, and we were only on the Island for a week, so I had to narrow it down to a select few places. 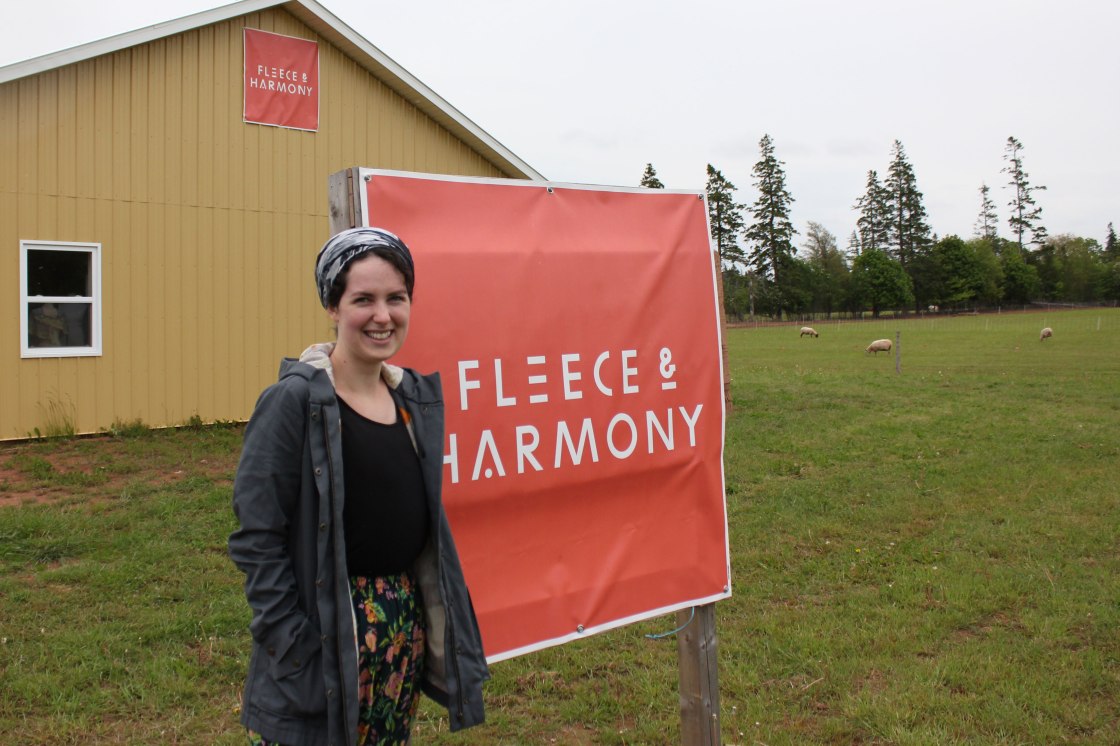 Our first day in PEI was pretty windy and rainy, so it was a perfect day for yarn shopping, in my opinion. We drove out to Belfast, which is conveniently home to both Fleece and Harmony and Belfast Mini-Mills. I follow Fleece and Harmony on Instagram (I love their branding), and I’ve squished a few skeins of their yarn over at The Purple Purl in Toronto, so I was really excited to visit their shop and sheep (hehe). They have a lovely shop, with windows that look into their processing facility. It was really difficult not being able to buy huge sweater quantities of yarn, and it was heartbreaking knowing it might be a while until I get around to knitting what I did end up buying. 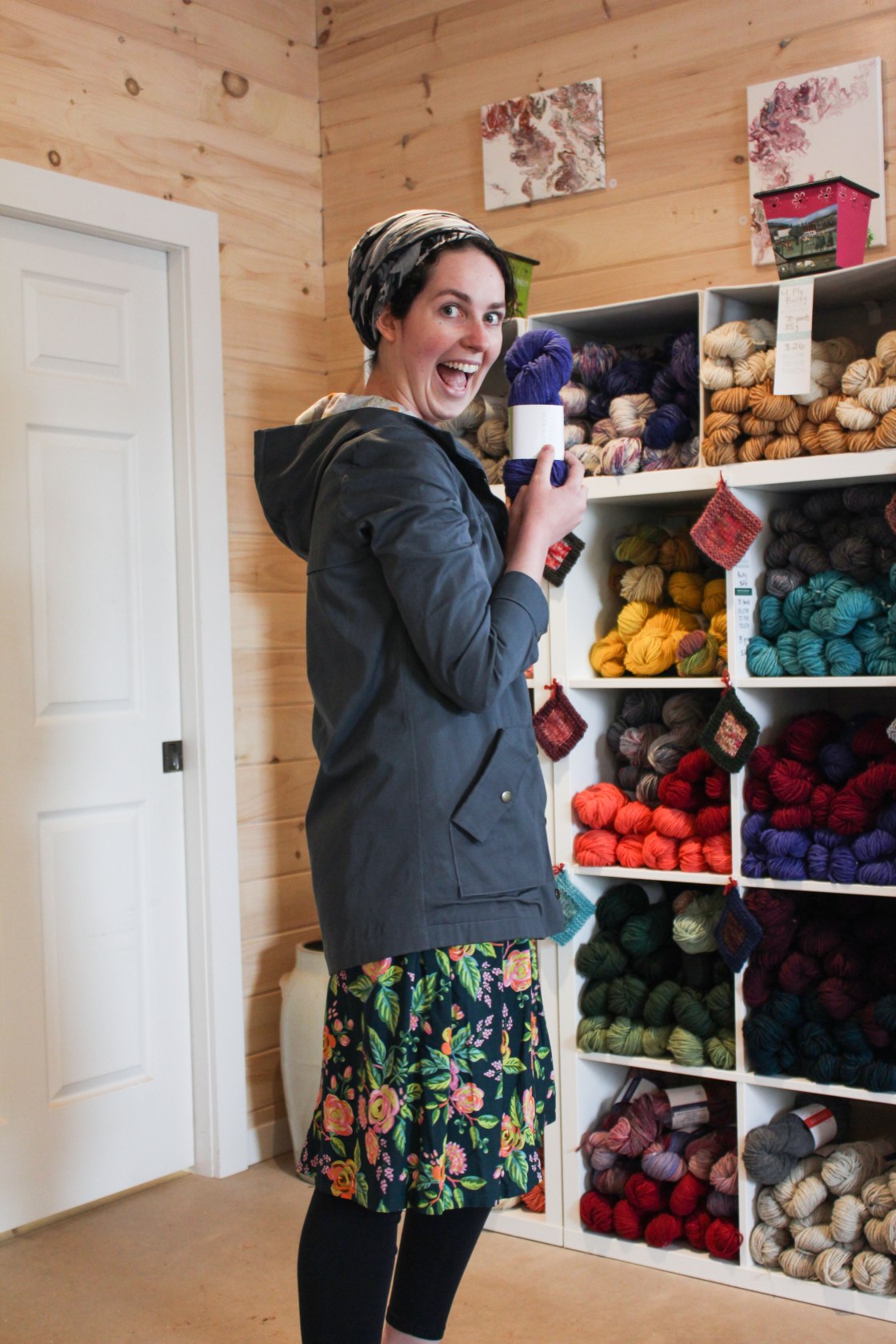 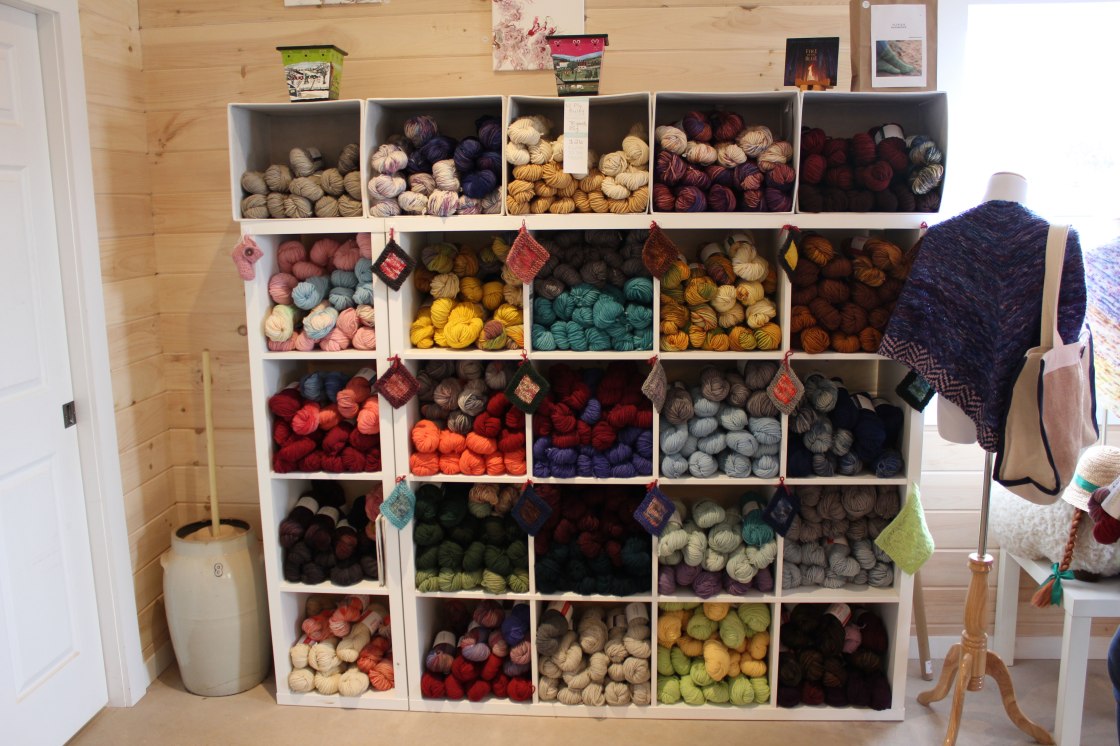 Still, though my stash output is slow, I couldn’t leave Fleece and Harmony without a skein (or three). 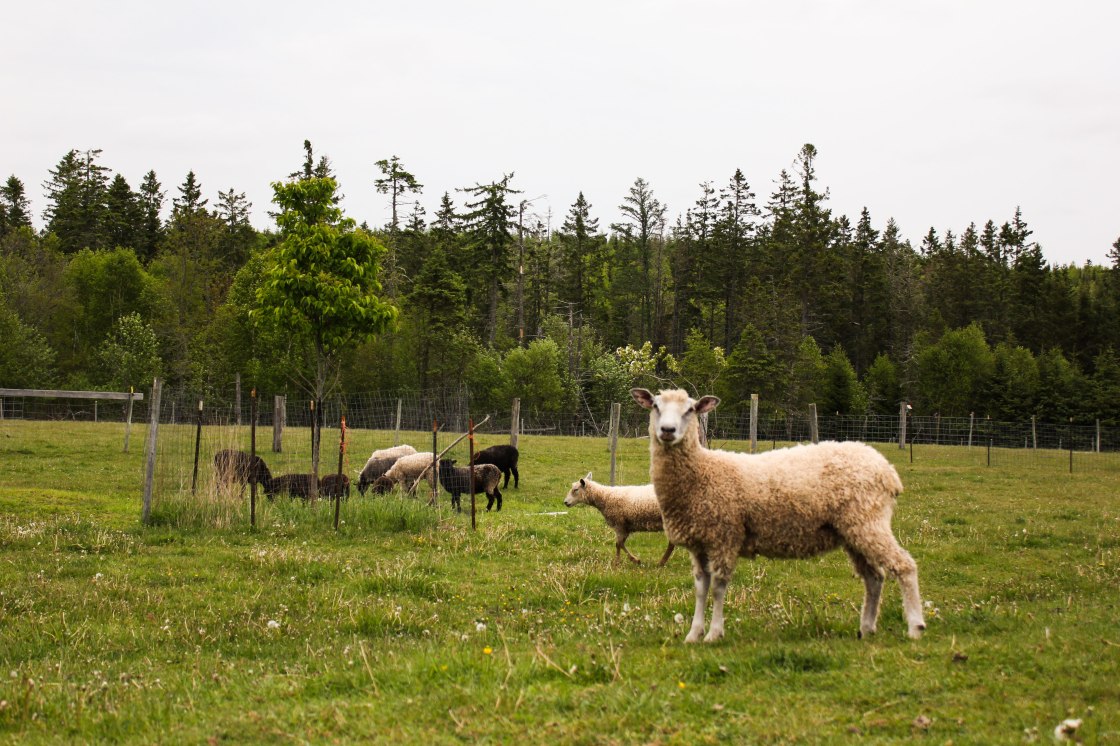 Then we drove over to Belfast Mini-Mills, which is only about a 5-minute drive away. We parked by a little flock of shy and surprised sheep (and a donkey), which we later learned are more for show (not used for wool or meat). There are also some funny looking chickens (that run around loose), bunnies, and dogs on the property. Linda, one of the owners and our guide, also introduced us to their crow (whose name escapes me), who they had rescued and has become their pet. He likes hamburger meat and shiny things, as I assume all crows do. 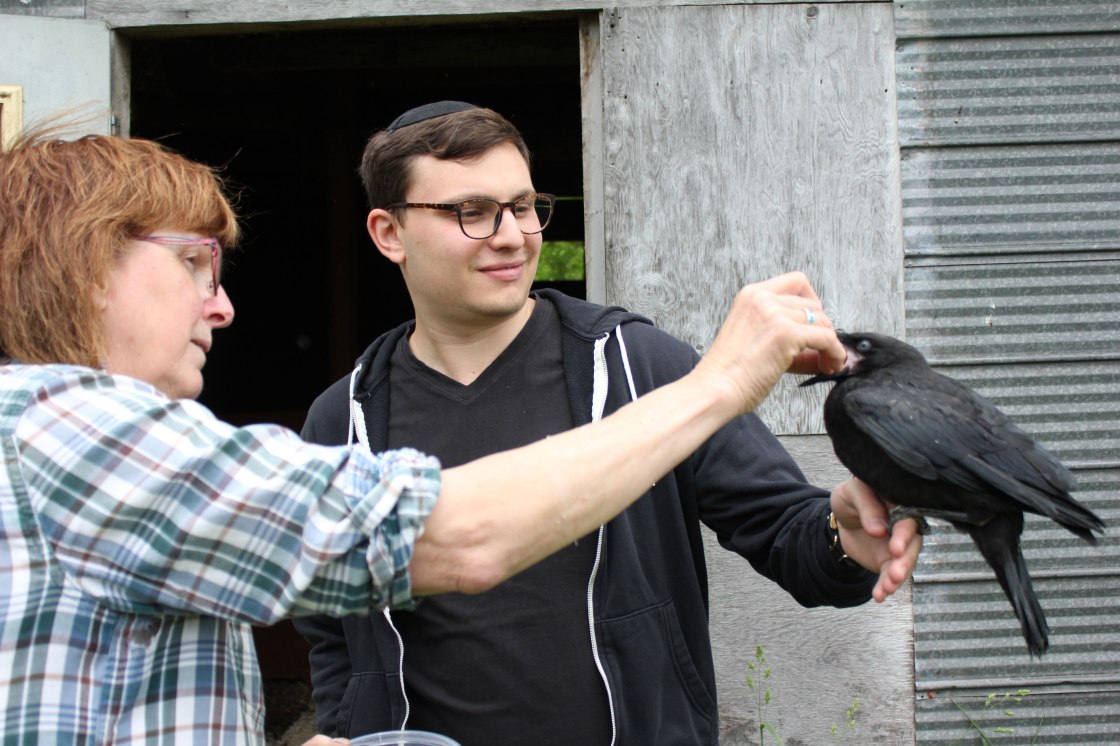 We also had a tour of the facility where all the magic happens, and got to see all the wonderful things that go into making wool products (including their industrial felter!). I was too excited about the dogs saying hello to me during the tour, and failed to get photos of the machinery. 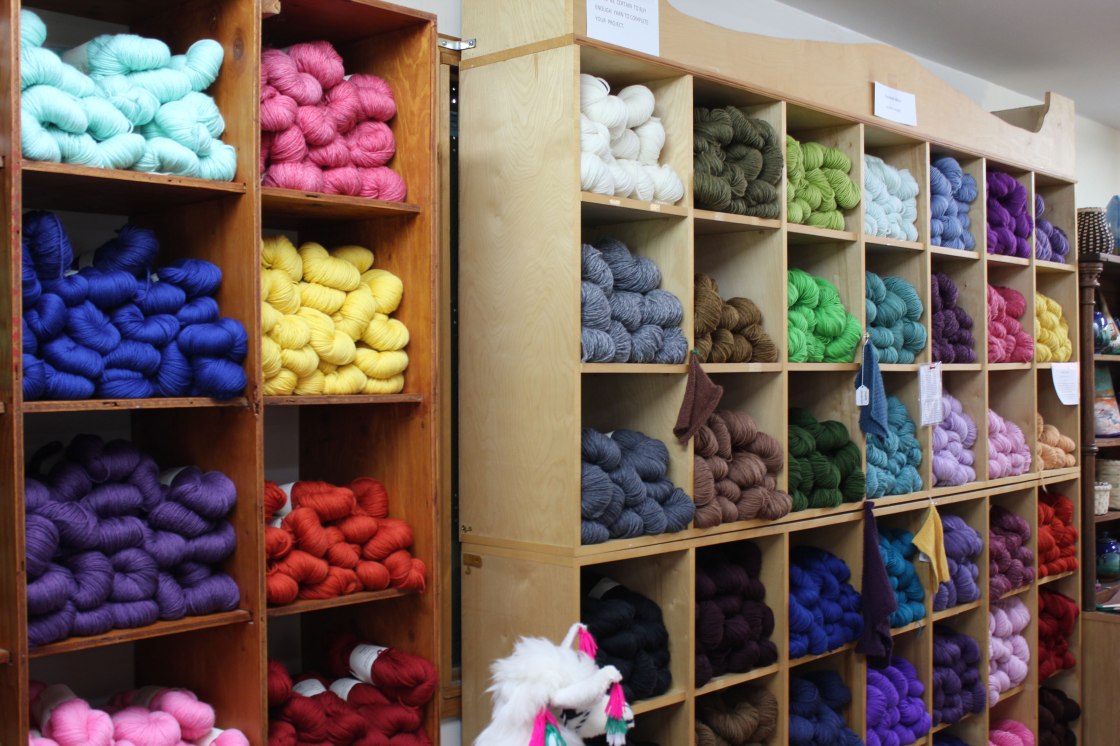 The shop at Belfast Mini-Mills is amazing. They stock a great selection of yarn and roving milled on-site, including exotic varieties such as qiviut (a type of yak, I believe), samoyed (the dog breed), angora, and more. Their superwash merino comes in beautiful colours and is very reasonably priced. I didn’t buy any yarn, as last year my FibreShare partner visited Belfast Mini-Mills and mailed me a skein as part of my package. I loved it so much that I called up Belfast Mini-Mills and ordered 4 more skeins, and made a Rock Creek pullover out of it. They also have all sorts of wonderful gifts – sheepskin rugs, mittens, slippers, children’s books and toys, even jewelry. I didn’t walk out of there empty-handed – I bought a sweet little felted sheep made in Peru, and some sheepskin teddy bears as baby gifts for my future nieces/nephews. 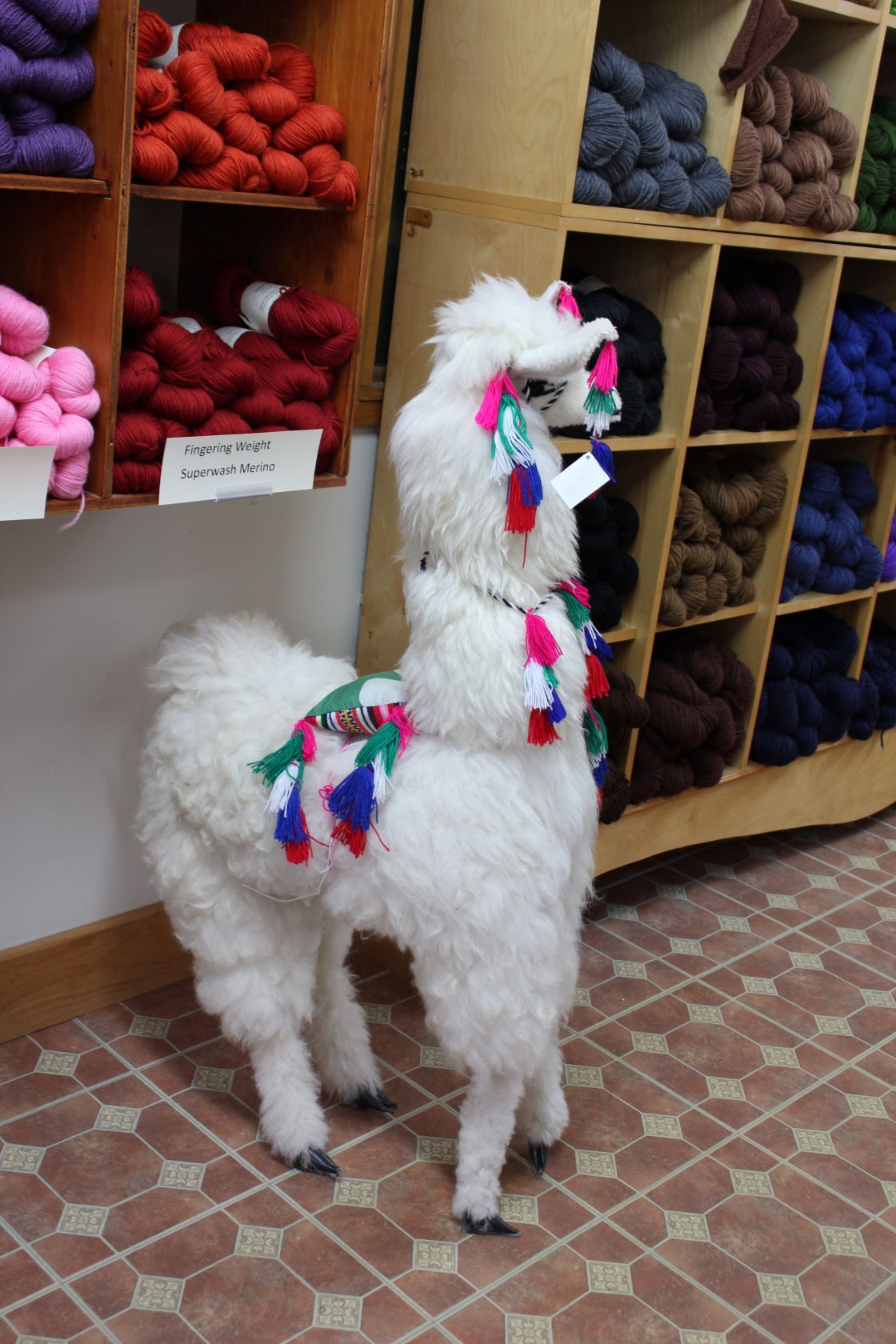 Our next stop was in Montague, where we visited Artisans on Main, which was a lovely gift shop in the small town of Montague. It’s stocked with beautiful items all made by artisans local to the island. While it was a lovely shop, I’m not sure it warranted a trip to Montague, as in the rainy weather we couldn’t walk around and find much else to do there. We did drop in Stitches & Crafts, which was just up the road, but as it stocked the same sort of things you might find at a Michaels, we didn’t find much reason to stick around. 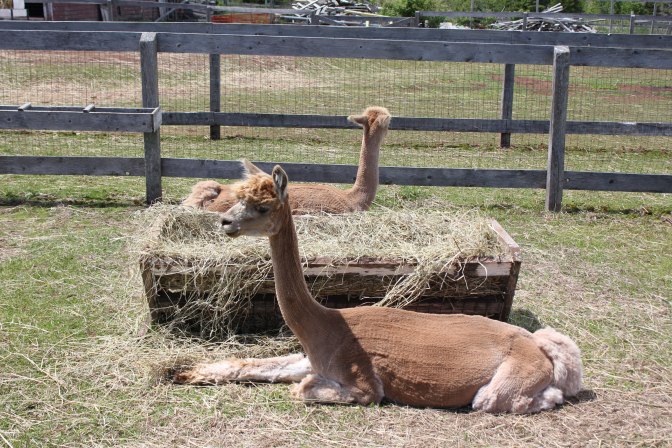 The next day we visited Green Gable Alpacas, because I love alpacas and just had to see some up close. At Belfast Mini-Mills our tour of the place was free, so I kind of assumed Green Gable Alpacas was as well (I guess I didn’t quite do my research, because rates are on the website). The owner kind of mumbled something about taking care of admission when we went back to the shop, and then brought us inside the pen.

We visited the pregnant female alpacas, who had been sheared just days before, and were showing off their new haircuts. To my disappointment, we were told that alpacas like their personal space, and we didn’t get to touch them much. We learned about the alpacas for about 10 minutes, and then we were brought to the pen where the males were kept, and we got to feed an apple to the one llama, and that was our tour. Both Eitan and I were both kind of surprised to be charged for it, but we didn’t mind supporting a Canadian farm. I didn’t buy any yarn, as, like I mentioned earlier, my yarn stash isn’t moving very quickly these days, and truth be told, I don’t especially love alpaca yarn. I was drawn to a skein that was made to match the incredible rusty red earth of the island, but when I learned it would cost about $60 I decided against it. $60 just isn’t worth the cost of a mere yarn squoosh, so I settled on a sweet little felted alpaca to go with my little felted sheep. 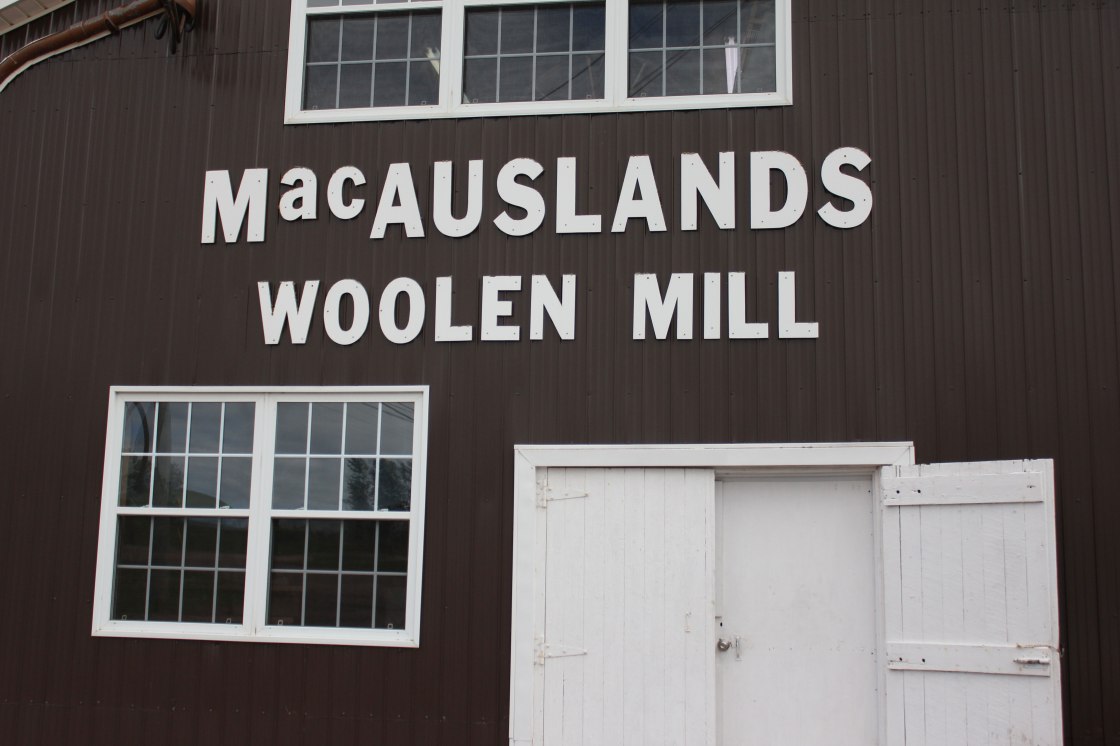 We also stopped at MacAusland’s Woolen Mill, though I didn’t really feel it was worth the stop for us. We had visited the Potato Museum, which is nearby, so I thought we might as well drop by, but it’s quite far from central PEI where we were staying. It must be worth the trip to some people, though, because it was quite busy, even though we only got there an hour before closing. 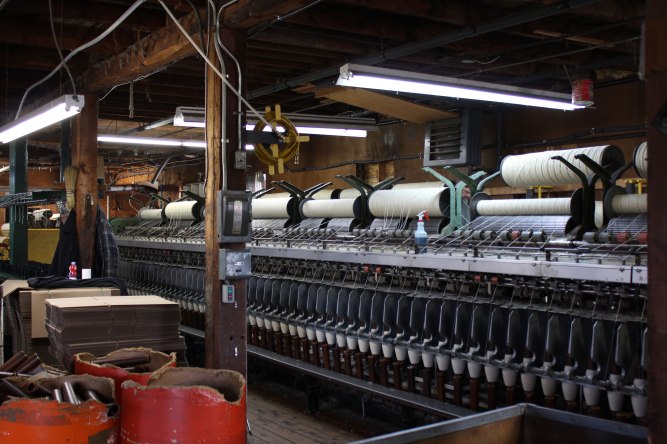 I think MacAusland’s is famous for their woolen blankets (which I’m not especially in need of), and their yarn was being sold at Belfast Mini-Mills, so there wasn’t much to see. I was hoping to see all the production and machinery at work, but when you walk in you’re brought right into it without any real explanation of guidance (the shop is up the stairs). It’s very dusty and noisy, and I kept worrying I would walk into some dangerous machine by accident. Upstairs they have piles of their woven blankets, and huge white sacks of their yarn. Their yarn could best be described as “woolly wool”, and is the sort of wool that makes you think of itchy wool sweaters you hated as a kid. One of the folks we met earlier on the Fibre Trail told us that they don’t use any “special” sort of sheep for their wool (pretty much the sheep used mostly for their meat). 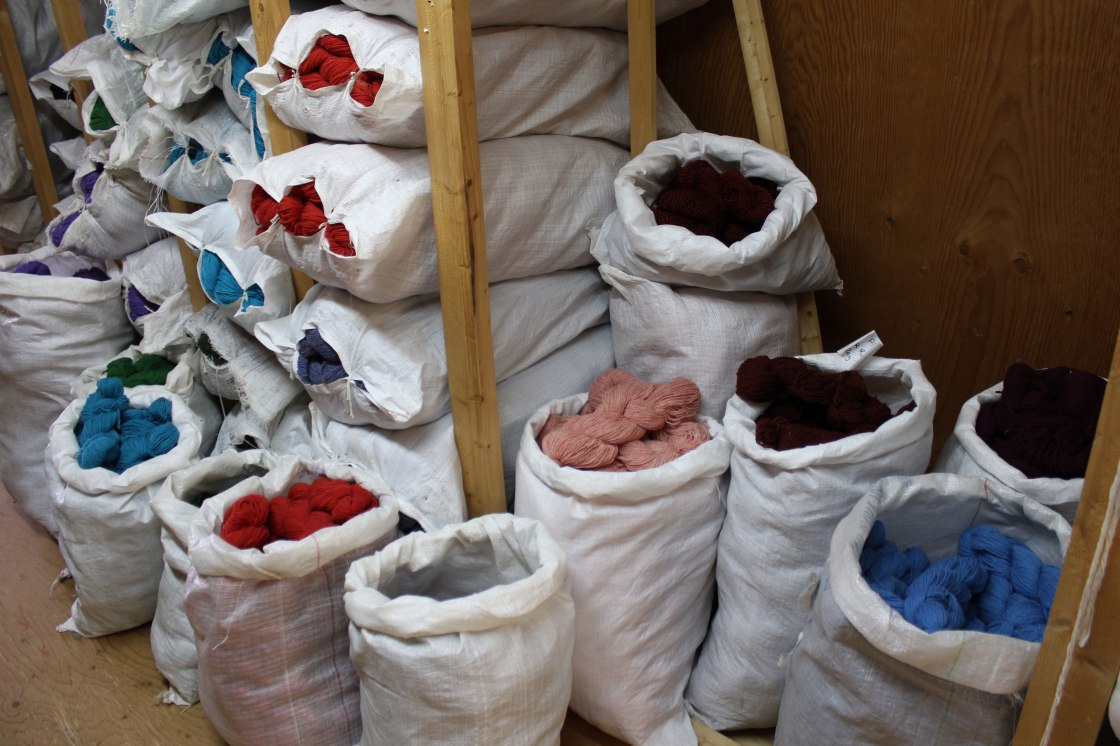 An unplanned stop on the Fibre Trail that we made was at Ewe and Dye Weavery, and we popped in for just a second. We hadn’t intended to go, but we had some spare time on our last touring day on the Island, and decided to drive down to Victoria-by-the-Sea. It was an absolutely lovely little town – very picturesque – and we saw Ewe and Dye Weavery on the main street, so we popped in. It’s a sweet, tiny little shop (much like the town it’s in), but didn’t find that much caught our eye. 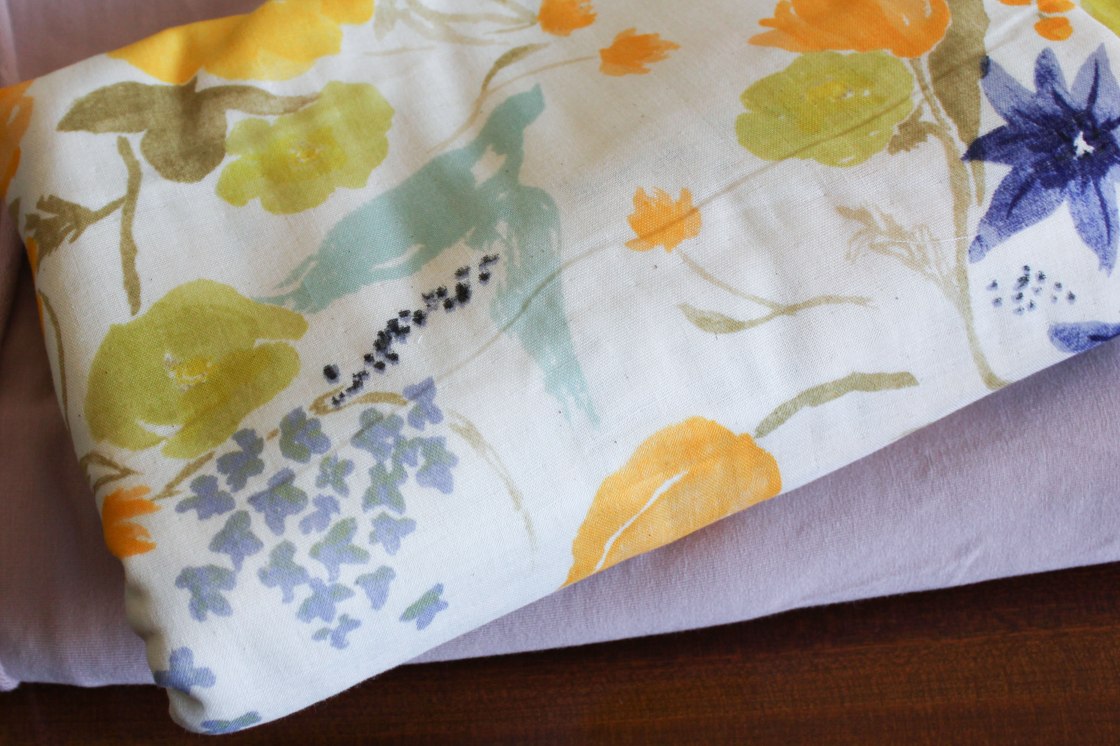 One of my FAVOURITE stops actually wasn’t “on” the Fibre Trail. I found Five Arrows Fabrics on Instagram months ago, and got in touch with owner Natasha just before our trip. I had assumed Five Arrows was a bricks-and-mortar store, but Natasha actually sells fabric from her own home to garment sewists on the island (as well as online). She began selling fabric because there was a real lack of garment fabric for sale on the island (though there are a few quilting fabric stores). There isn’t even a Fabricland/Fabricville, which you can find pretty much anywhere else in Canada. Anyways, I just HAD to go to the only garment fabric shop on the Island! Thing is, Natasha didn’t treat me like a customer, she treated me like a guest, and welcomed me and my husband into her home. She offered us tea and introduced us to her husband and boys, and we had a really lovely chat about sewing and life on the island. While she told me there was no expectation to buy anything, I knew that once I had seen the Nani Iro she had in stock, I wasn’t leaving without it (I bought some lovely blush pink bamboo french terry as well). Natasha is starting small, she says, but I definitely think it’s worth checking her out 🙂 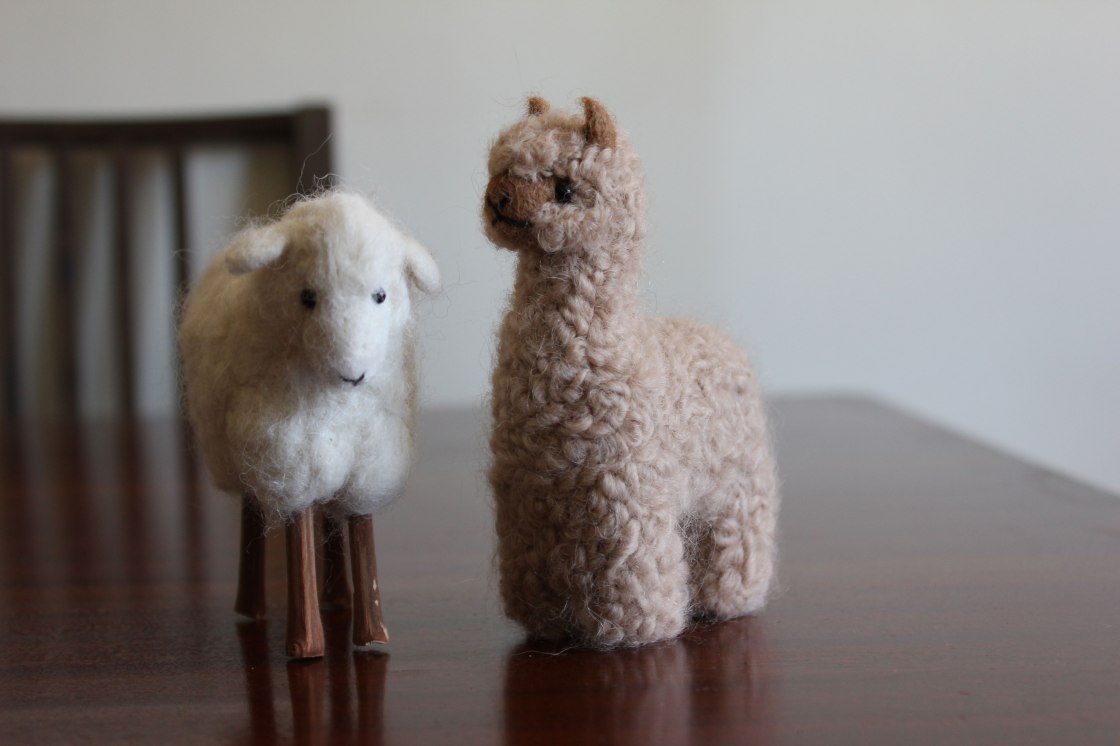 Are you hoping to visit PEI soon? If so, I would be happy to share tips and must-see places that really made our time on the Island special.